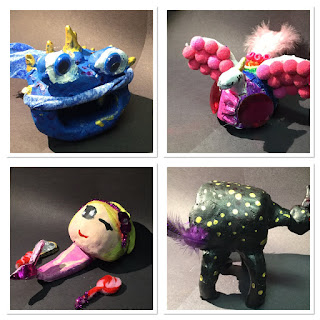 What does Mickey Mouse the Monster Pirate have to do with a unit on adaptation?

The challenge: Grade 3 artists needed to demonstrate their understanding of adaptation and clay skills by creating their own ceramic creature that had somehow adapted to their environment (real or imaginary) to survive.

Class 1: Clay play I went over basic clay techniques and children were given a 45 min block to experiment with clay, with the knowledge that we'd recycle whatever they made.

Class 2: Pinch Pots Every child created a pinch pot along with me, most were able to make them on the first try but some needed a few attempts.  Names and classes were etched in the bottom and all pots were sprayed with water and stored on a lunch tray covered in a garbage bag. The pinch pot would later be the body of whatever creature they decided to make.

Class 3: Provocation I purposely waited to do the provocation until the unit had already started in the homeroom, so students would already have an idea about what an adaptation is. We started with a Thinking Routine called Claim Support Question.  I showed multiple images of mixed up animals and encouraged them to reason with evidence-- where might this creature live?  What adaptations does this creature have in order to live in its environment? 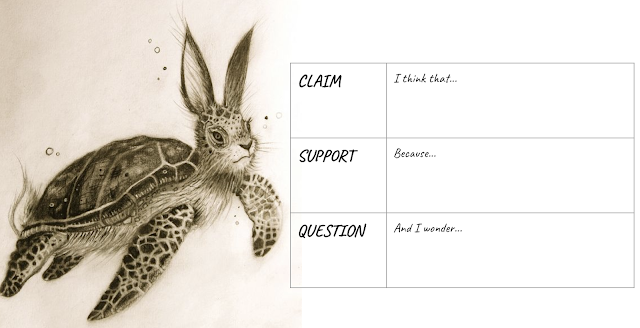 Class 4: Planning I started by showing the kids how the positioning of a pinch pots can impact what the final piece will look like: 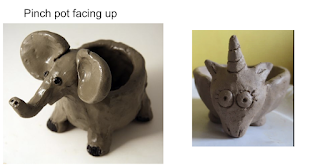 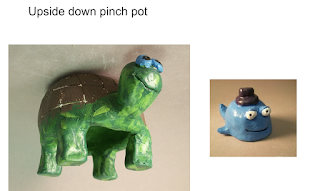 Then I asked we had a discussion about creating our very own creatures and where they might live--- outer space? under the kitchen table?  in a swamp? Santa's Village? ....then we thought about what adaptations a creature needs in order to survive in that environment.  Students then filled in a planning sheet for their creatures. 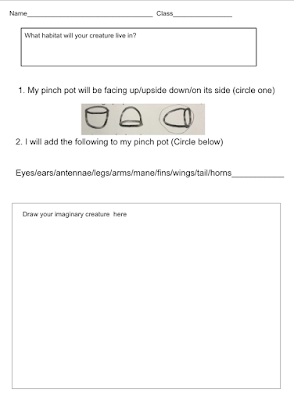 Class 5/6: Create! Students were introduced to "score and slip" and worked on taking their art from pinch pot to a unique creature.  Most needed two 45 min blocks to complete this part.

Class 7: Embellishments Once the pieces were bisque fired, students painted with acrylic paint.  They chose one "base color" and covered the whole piece with it to start.  Once their base color was complete they could add other colors as they wished.  Once the paint was dry, many students chose to add glitter, feathers, sequins, etc. Some students even sewed clothes for their creatures at the Fibers Center or constructed cardboard beds at the 3D Construction center. 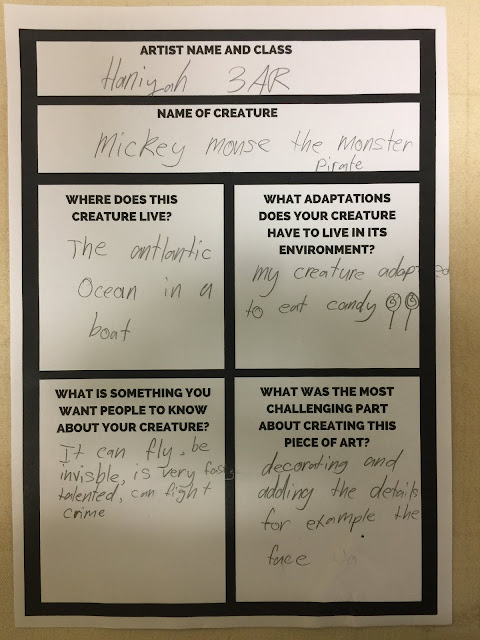 If students had extra time, they took photos of their creature and used the Bazaart app to create an imaginative collage starring their creature. Many chose to imagine themselves interacting with their creations. 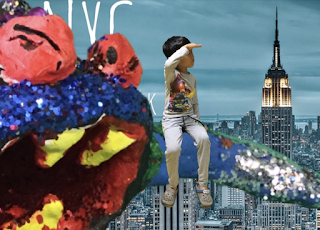 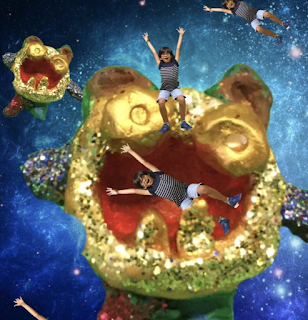 ATL's in the PYP

ATL's are the skills and attitudes that permeate everything we do both in a PYP classroom and in our daily lives.

When noticing and naming the ATL skills, I find that it's helpful to have specific examples so that students can easily make the connection between their behavior and the ATL.  This is helpful for a reflection at the end of class or for goal setting.  Full size posters are available here. 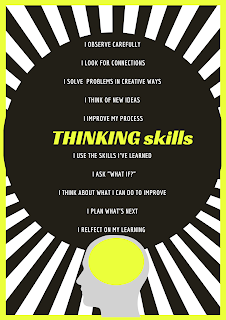 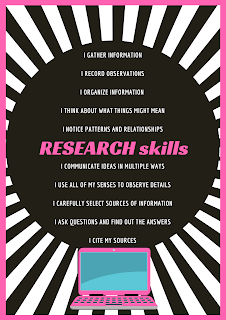 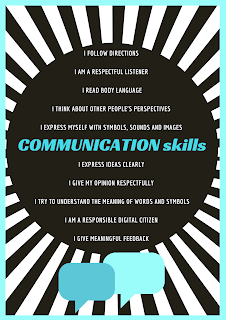 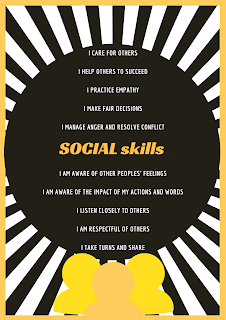 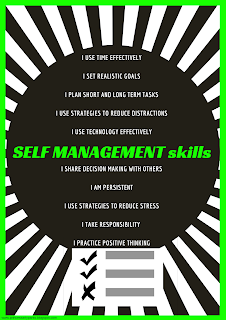 Self portraits as a barometer of student agency

It all started in 2014 with aesthetically pleasing and very much teacher directed Pop Art style portraits.  They were poster sized and when hung together they were stunning.  I even blogged about them. But after the big art exhibition was over, I was distressed to find many of them were left behind by the students.  After lots of reflection, the message was clear: this my art project, not theirs.  I had chosen the Pop Art style, the size, the media.  All the students needed to do was show up and follow instructions step by step. There was no emotional investment on their part, no trial and error and no ownership.  How much of the art was theirs and what did they really learn?

Fast forward to 2019-- and I feel like I am finally getting the hang of a choice based approach.  My favorite question to ask the students about their completed work is, "What inspired you?" If the artwork truly is theirs, they should light up as they explain the iterations that their piece took and where their ideas came from.  Since I have taught these children for the last 3 years, they have never had to create art to conform to someone else's aesthetic and their portraits are a testament to the confidence that a few years of a student centered approach can bring.

Central Idea: Self portraits communicate who we are or who we want to be

What materials did this year's 5th graders use?  Lots of mixed media, a fair bit of embroidery, various iPad apps, watercolor and colored pencil work.  These talented artists worked on these for 90 minute blocks for about 10 weeks from start to finish. So proud of what they were able to accomplish.

Email ThisBlogThis!Share to TwitterShare to FacebookShare to Pinterest
Labels: Grade 5, self portraits, Who We Are 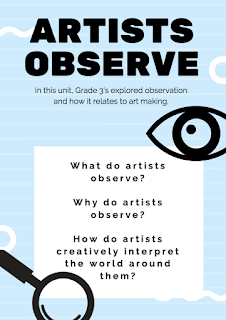 The Grade 3's are knee deep into a stand alone unit that digs into observation, interpretation and creativity.

I saw a few blog posts about a project called Tantamounter and I thought it might be fun to try.  Tantamounter was a project that started in 2005, a group of artists in New York would take an object from the public and re-create in an artistic way that was "tantamount" to the original. Check it out here.

Here were the constraints:

-they had three 45 minute blocks to complete them

-the object they copied had to be physically in the room (we talked a lot about form, they needed to be able to hold the object and look at it from all perspectives.) I had a box of random items for them to choose from.

-they could use any center they wanted except painting (no time for paint to dry). Open centers were Fibers, 3D, Drawing, Collage, and Polymer Clay.

Posted by Kristin at 4:41 AM No comments:

Pattern: A TAB/PYP Unit of Inquiry

Some examples of student work: 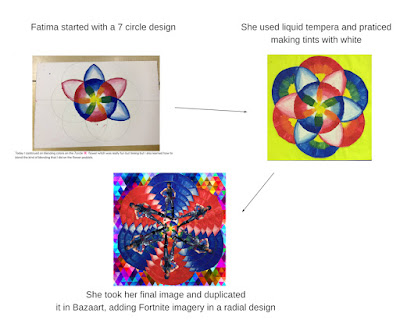 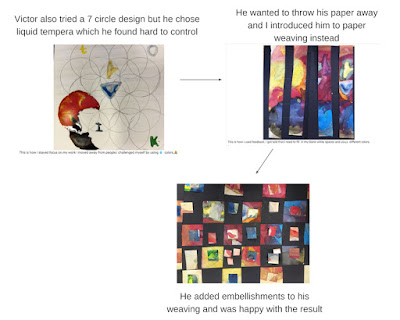 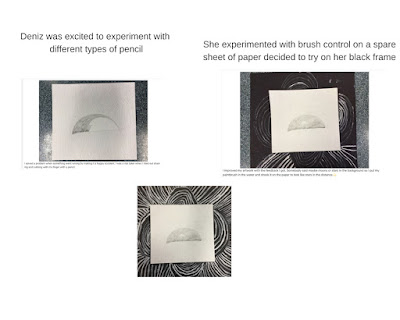 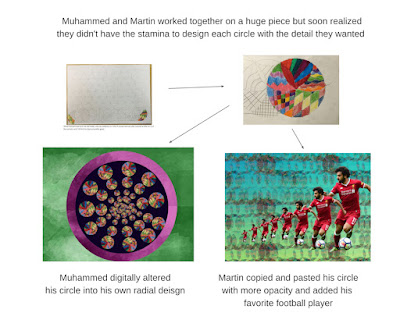 For my professional inquiry goal this year, I want to find any gaps in my TAB/PYP practice and figure out how to address them, with a push on promoting even more learner agency than before.  My Pedagogical Coordinator thought it might be smart to start out by creating a profile of traits that a PYP/TAB learner should have so I had a metric to gauge which students still needed more scaffolding. I started making a list, and all roads took me back to the Learner Profile.  If you look closely there are many links to both the Studio Habits of Mind and the ATL's. So,

It became clear that is was time to update my old Learner Profile posters with clear and succinct statements about what each profile trait might look like in a TAB/PYP art room where the students are in the driver's seat of their own learning.

It also was a good opportunity to include photos of diverse contemporary artists at work. These were all made on Canva and are available in full resolution here. 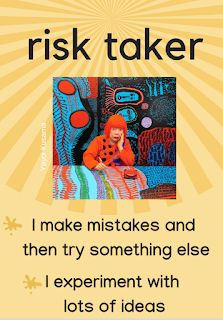 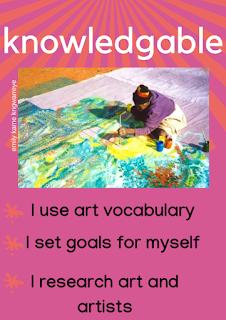 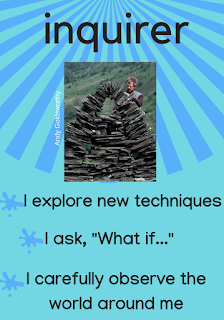 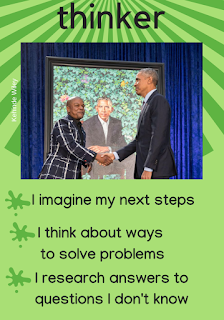 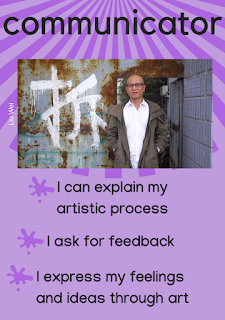 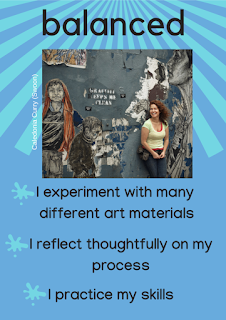 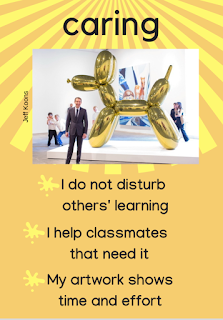 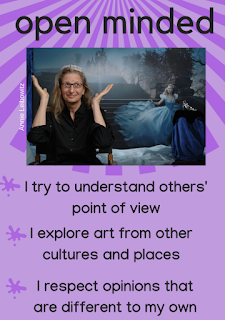 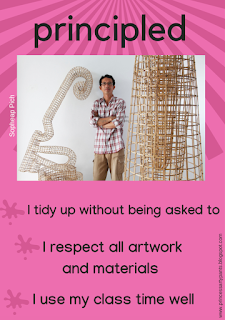